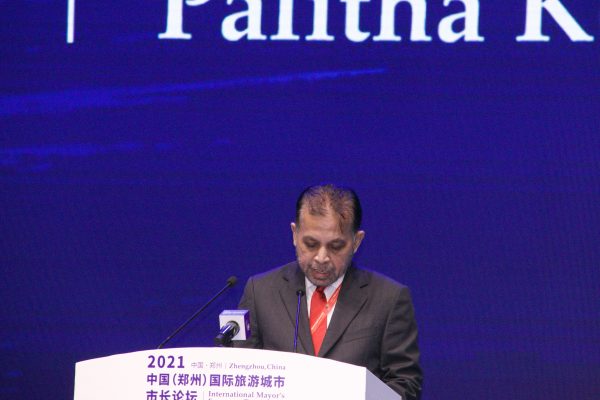 The forum was organised by the Ministry of Culture and Tourism and Henan Provincial People's Government under the theme of “Market Prosperity, Scientific and Technological Innovation to Enhance the Competitiveness of Urban Tourism”.

In his opening address, member of the Standing Committee of the Henan Provincial Party Committee and the Secretary of the Zhengzhou Municipal Party Committee Xu L iyi, explained the construction project of cultural tourism zone, “Three cities, Three hundred kilometres, Three thousand years” as part of promoting the cultural tourism. This project also highlighted and promoted China’s civilization and the culture of the Yellow River.  Xu stated that through this project, they expect to increase the tourist interactions in the Henan Province and also to expand the cultural cooperation with other countries of the Belt and Road Initiative (BRI).

Ambassador Dr. Kohona was also invited to address the event. While congratulating the Henan Provincial Committee members, Dr. Kohona invited Chinese people to enjoy the natural beauty of Sri Lanka and to explore its potential business opportunities. Dr. Kohona added that Sri Lanka and Henan Province must develop closer relations and that will encourage further exchanges in various sectors such as tourism, culture, religion, education, trade and investment.