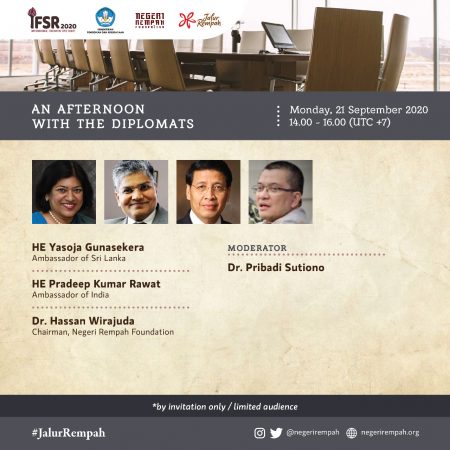 The Spice Route Foundation and the Ministry of Education and Culture of the Republic of Indonesia hosted the 2nd International Forum on Spice Route (IFSR) : Celebrating Diversity and Intercultural Understanding through “Spice Route” virtually from 21 – 22 September 2020 in Jakarta, Indonesia.  This international forum aims to broaden the opportunities for cross-border and cross-cultural dialogue in revisiting the Spice Route as  common heritage which explores various possibilities for international cooperation.

Ambassador of Sri Lanka to Indonesia Yasoja Gunasekera and ASEAN participated in a “Panel discussion with the diplomats” which included, former Foreign Minister of Indonesia and Chairman of the Spice Route Foundation Dr. Hassan Wirajuda and Ambassador of India to Indonesia Pradeep Kumar Rawat on 21 September 2020, at which it was highlighted that Sri Lanka, India and Indonesia were key players in ancient trade routes between the Indian and Pacific Oceans.

Ambassador Gunasekera noted that in ancient times, Sri Lanka enjoyed a central position in all the main sea routes of Asia, including the Spice Route, and served as the greatest emporium in those parts and that in the modern age, President Gotabaya Rajapaksa has stated that Sri Lanka should use its unique locational advantage to become one of the world’s leading maritime hubs.  The President has directed that Ports in Colombo, Galle, Trincomalee, Kankesanthurai and Oluvil should be developed.

Historical relations between Sri Lanka and the countries of South East Asia span thousands of years and began as a result of maritime trade between China and the West. Sri Lanka spread Buddhism to the coastal lands of Southeast Asia and influenced Myanmar, Cambodia; Vietnam; Thailand and Laos to embrace the Theravada school of Buddhist thought which is practiced in Sri Lanka.

Ambassador Gunasekera further noted an important example of Sri Lanka’s socio-cultural relationship with South East Asia is the role played by Sri Lankan Malay community in the history and diversity of Sri Lanka. The Malay influence on culture in Sri Lanka includes Batik, Rattan weaving and Lace making as well as making influence in the rich tapestry of cuisine enjoyed in Sri Lanka.  Food such as ‘kokis’, ‘kavum’ and ‘Achcharu’ originated from Indonesia.