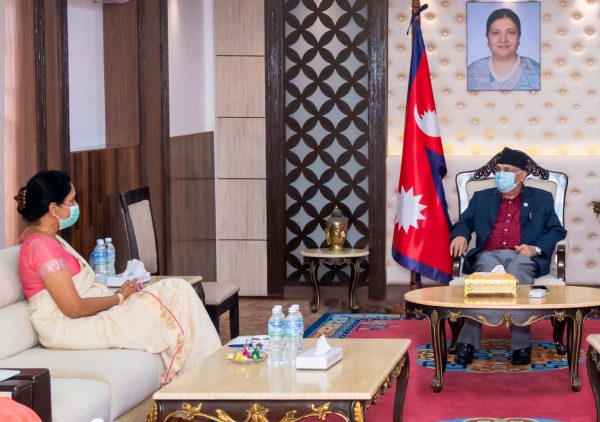 The Prime Minister made these comments when Sri Lankan Ambassador to Nepal Himalee Arunatilaka called on him on 18 August 2020 in Kathmandu.

Prime Minister Oli recalled his telephone conversation with the newly elected Sri Lankan Prime Minister Mahinda Rajapaksa soon after his electoral victory which he described as unique, and having multifaceted significance.

The Prime Minister also stressed the importance of small countries like Nepal and Sri Lanka working together in multilateral fora. He also recalled with appreciation the assistance provided by Sri Lanka to reconstruct two temples in Kathmandu Valley, that were damaged in the 2015 earthquake, and informed about the work being carried out in and around Lumbini, including the upgrading of the Bhairawa airport that serves Lumbini, into an international one. He expressed confidence that the bilateral relations between Sri Lanka and Nepal can achieve new heights for the benefit of the two peoples.

Ambassador Arunatilaka noted that the historical relations between Sri Lanka and Nepal were founded on strong cultural and Buddhist links which were flourishing even before diplomatic relations were formalised. Lumbini is a strong and binding factor between the two countries and their peoples.

The Ambassador underlined the importance of working towards strengthening economic cooperation to take the bilateral relationship to the next level. In that context the Ambassador said that expanding trade, investment and technical cooperation was important. Education, tourism, hydropower and the services sector were discussed as areas with potential for further development.  It was also noted that direct air connectivity between the two capitals would go a long way in expanding trade and tourism between Sri Lanka and Nepal.

Advisor to the Prime Minister on Foreign Affairs, Rajan Battarai, Joint Secretary for South Asia in the Ministry of Foreign Affairs Yagya Bahadur Hamal and First Secretary of the Sri Lanka Embassy Dinesha Samrasinghe were also associated at the meeting. 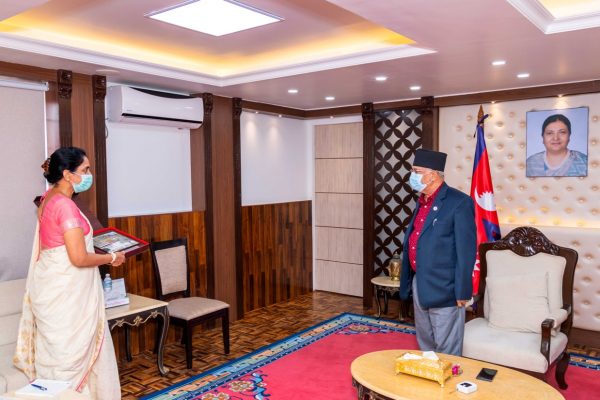