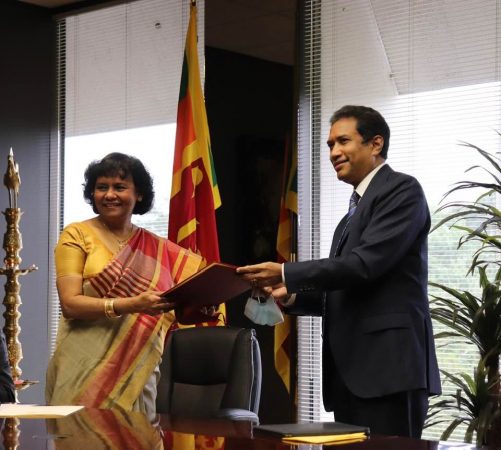 Ambassador of Sri Lanka to the United States of America Rodney Perera handed over the Commission of Appointment issued by Foreign Minister Dinesh Gunawardena to the newly appointed Honorary Consul in Texas Dakshini Senanayake on 09 October 2020 at an event held in Houston, Texas.  Even though restrictions are in place for large gatherings, representatives from the Houston Mayor’s office, the business community, the Sri Lanka Association of Houston and professional Sri Lankan Americans resident in Texas were in attendance.

Addressing the gathering, Ambassador Perera welcomed the appointment of Mrs. Senanayake and the opening of the new office of the Honorary Consul in Houston will enhance the Embassy’s efforts to promote Sri Lanka’s economic diplomacy initiatives in Texas, as well as in assisting Sri Lankans living in the second largest U.S. state by both area and population.  The priorities of the Sri Lanka government and the opportunities in furthering commercial and educational/research ties with the State of Texas were highlighted by Ambassador Perera.

Being an Attorney at Law, Mrs. Senanayake has more than twenty years of experience in the area of immigration and nationality law and has her own law office in Houston, the fourth most populous city in the United States