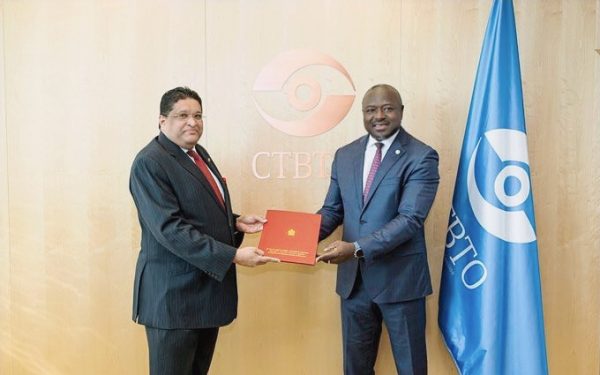 While exchanging pleasantries, the Permanent Representative and Executive Secretary discussed matters of mutual importance. Ambassador Majintha Jayesinghe highlighted that Sri Lanka throughout history has engaged actively and contributed to deliberations in international fora. Sri Lanka became a member of the United Nations in 1955, the International Atomic Energy Agency (IAEA) in 1957, signed Comprehensive Nuclear-Test-Ban Treaty Organization in 1996.  It was further mentioned that Sri Lanka signed CTBT in 1996 and became the thirteenth State signatory to sign Facility Agreement in 2000.

The Executive Secretary appreciated Sri Lanka’s active role in the Organization and recalled fond memories of his visit to Sri Lanka to participate in a CTBTO Regional Introductory Course on On-Site Inspection (OSI) in Dambulla in 2015. Dr. Zerbo commended Sri Lankas commitment and contribution towards a Nuclear Weapon-Free Zone (NWFZ) and for supporting the UN Resolution for Nuclear Weapon-Free Zone in South Asia.

The Ambassador and Permanent Representative Majintha Jayesinghe recalled that at the Non-Aligned Summit in Cairo in 1964, world’s first women Prime Minister Madam Sirimavo Bandaranaike’s contribution to the summit to issue a declaration in favour of global “denuclearized zones” and to convene a world disarmament conference under the auspices of the United Nations which subsequently led to  the establishment of Conference on Disarmament (CD).

The Permanent Representative thanked the Executive Secretary for the assistance of Organization for providing training opportunities to Sri Lanka in Operating and Maintenance of IMS facility, NDC Capacity Building and OSI Training and reiterated Sri Lanka’s firm commitment to the Organization. 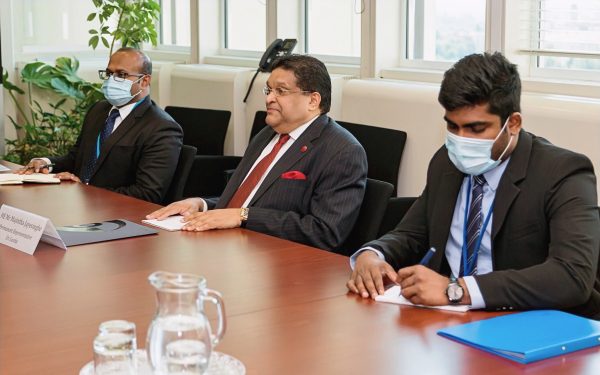