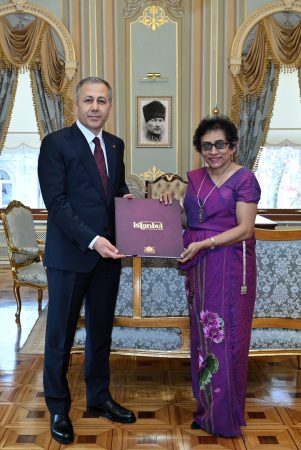 Ambassador Dissanayake called on Governor Ali Yerlikaya and the Deputy Governor Ozlem Bozkurt Gevrek and during the meeting recalled Sri Lanka’s relationship with Türkiye which began with the appointment of an Honorary Consul to Sri Lanka in 1864 with residence in Galle during the Ottoman Empire.

Ambassador Dissanayake highlighted the significance of 2023 for the two countries with Türkiye celebrating its 100th anniversary of establishment of the Republic, Sri Lanka celebrating its 75thAnniversary of independence as well as the 75th anniversary of the establishment of diplomatic relations between the two countries. She added that to celebrate these, the Embassy is planning to organize events in Ankara, Istanbul, Izmir, and Antalya. The Ambassador invited the Governor to the event in Istanbul to be held on 16 and 17 February.

Ambassador referred to historic connections Istanbul has with Sri Lanka, with Istanbul and Sri Lanka being international trading hubs for centuries. During the meeting, Ambassador Dissanayake highlighted some of the key products, both traditional and non-tradition, some of the investment opportunities and vast potential in promoting tourism. Ambassador underscored that the increase in tea export itself could contribute to enhance Türkiye’s target of reaching 500 million USD worth of bilateral trade with Sri Lanka, which is currently hampered to a certain extent by high taxes imposed for value added luxury teas entering the Turkish market.

Ambassador Dissanayake suggested that as a way of celebrating 75 years of diplomatic ties between the two countries, a sister city relationship could be established between the Governorate of Istanbul and the Southern Province of Galle, as it was in Galle that the first Hony. Consulate of the Ottoman Empire was established and both Istanbul and Galle have been trading ports for centuries.

Ambassador Dissanayake spoke of discussions with Departments connected to archaeology in leading universitiesfor academic and undergraduate exchange programmes and summer schools to enhance heritage tourism in both countries.

The Governor appreciated Ambassador Dissanayake’s ideas to prosper not only commercially but also through cultural and educational relationships between two countries, noting that historically Istanbul has not only been a trade center, but also a cultural melting pot.

Prior to the meeting with the Governor, Ambassador Dissanayake had a brief informal discussion with the Vice-Governor, Ozlem Bozkurt Gevrek who is the first female Governor of Türkiye. Discussions were focused on women in governance and women’s participation in various types of professions and businesses in the two countries. Both acknowledged and admired the role of the Türkiye’s founding father, Mustafa Kemal Ataturk in empowering women in early 20th century. 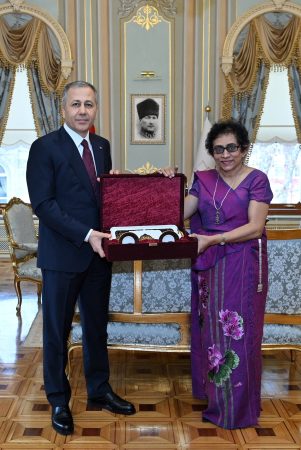 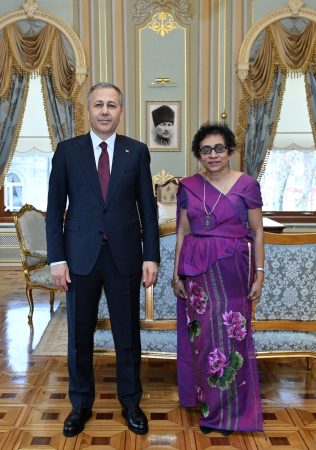