Sri Lankan Embassy in Washington D.C. Organizes a Special Event to Unveil the Statue of Lord Buddha and to Venerate the Sacred Jaya Sri Maha Bodhi Tree Sapling at the Embassy Premises 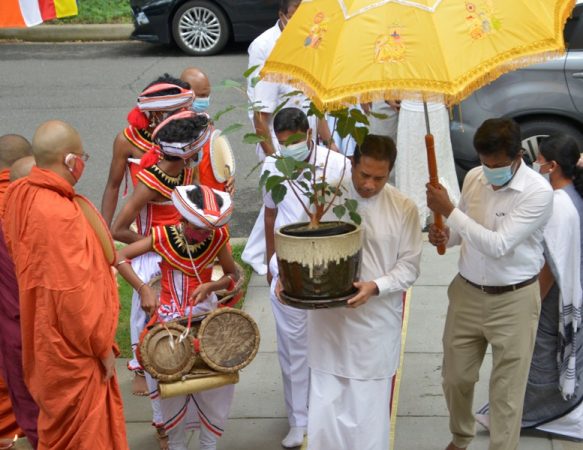 The Sri Lankan Embassy in Washington D.C. organized a solemn event on 2 of September 2020 at the Embassy premises to unveil the statue of Lord Buddha and to venerate the sacred Jaya Sri Maha Bodhi Sapling, which will be planted at the 'Metta Vihara' in Houston, Texas.

This is the first in-person event held at the Chancery premises since March 2020, with limited participation in view of the safety protocols in the Washington D.C area due to the COVID-19 pandemic situation.

The event commenced with the singing of the National Anthem.

Mr. Mahendra Rodrigo representing the 'Dayaka Sabha' of the 'Metta Vihara' in Houston, highlighted the process of bringing the sacred Jaya Sri Maha Bodhi Sapling to the U.S.

Participating from Sri Lanka through a digital platform, Chief Incumbent of Metta Vihara in Houston, Buthpitiye Samitha Nayaka Thero said that receiving a sacred Jaya Sri Maha Bodhi sapling to the Metta Vihara can be considered as a significant milestone, and expressed gratitude for all who have assisted in this meritorious act. Blessings for the occasion from the ‘Atamasthanadhipathi’, Ven. Dr. Pallegama Siriniwasa Nayaka Thero and the Chief Incumbent of ‘Thuparamaya’, Kahalle Gnaninda Nayaka Thero were also conveyed by Ven. Samitha.

In his felicitation message, President Gotabaya Rajapaksa noted that unveiling a statue of Lord Buddha at the Embassy premises would pave the way to reflect the Sri Lankan identity and culture, when hosting Buddhist programmes at the Embassy premises. President Gotabaya Rajapaksa further noted that by planting a sacred Jaya Sri Maha Bodhi Sapling at the 'Metta Vihara' in Houston, Texas provides a greater opportunity for Sri Lankans living in the city of Houston to venerate the sacred Bo sapling.

Hon. Mahinda Rajapaksa, Prime Minister and Minister of Buddhasasana, Cultural and Religious Affairs in his felicitation message noted that the unveiling of a statute of the Lord Buddha and organizing an event to venerate the sacred Jaya Sri Maha Bodhi sapling at the 'Metta Vihara ' in Houston, Texas will enhance the ‘joy of Buddhism’ of the entire Sri Lankan community in the U.S.

In his felicitation message, Foreign Minister Dinesh Gunawardena emphasized that the statute of the Lord Buddha unveiled at the Embassy premises will be respected by all Sri Lankans, and also noted that planting a sacred Jaya Sri Maha Bodhi sapling at the 'Metta Vihara' in Houston, would result in a ‘Buddhist Revival’, among Sri Lankans and other communities in Texas.

Addressing the gathering, Ambassador Rodney Perera said that the unveiling the statue of Lord Buddha at the Embassy premises will pave the way to fulfill a long-awaited requirement of the Embassy, since Sri Lankan way of life is underpinned to a great extent by the values and teachings of the Lord Buddha. He further said that planting a sacred Jaya Sri Maha Bodhi sapling at the 'Metta Vihara' in Houston will provide an opportunity for the community members in that area, including the younger generation to pay their homage to the sacred Bodhi Tree.

Ambassador Perera stressed that what our Venerable Monks do here, managing temples; teaching the children; servicing the spiritual needs of the community; and thereby supplementing the cultural diplomacy programs of the Embassy, is noteworthy. He said that like in so many places in the U.S., the Sri Lankan community in Houston is voluntarily devoting their time and resources to propagate the sacred teachings through these meritorious acts and opined that Sri Lanka’s best resource in the U.S. is the resident Sri Lankan community.

Speaking further, Ambassador Perera stated that “Our President has prioritized building local industries to uplift the livelihoods of the people in Sri Lanka and the economy. He has made it a cornerstone of his policy to protect, foster and project the real identity of Sri Lanka to the world. When people of every country on the planet that I have dealt with ask about Sri Lanka, I always focus on what makes Sri Lanka unique and special. The direct relevance of Buddhism to our way of life relating to so many aspects; mother nature, education, health, respect for others, irrigation, agriculture, governance; makes us unique. The sacred Bodhi Tree is what we consider an important symbol of Sri Lanka which can be taken overseas”.

He added that “this exercise of establishing temples, engaging in the propagation of the Dhamma, bringing the sacred sapling are good deeds in a distant country from the holy sites where Lord Buddha functioned, but certainly not easy tasks. It is known that Lord Buddha, who did not visit other continents including this part of the world, have mentioned that, it is very difficult to spread his teachings in some places. Therefore, if one wants to spread the words of the Buddha, one cannot complain about the difficulties and obstacles that one encounters along the way. As we know, the Buddha himself encountered more obstacles, but today millions of people enjoy the fruits of his teachings. We are pleased to know that the seeds of the Dhamma have been planted in many hearts in the US. Over the years, the meritorious acts our community continue to engage in, lovingly cultivate these seedlings for future generations”. 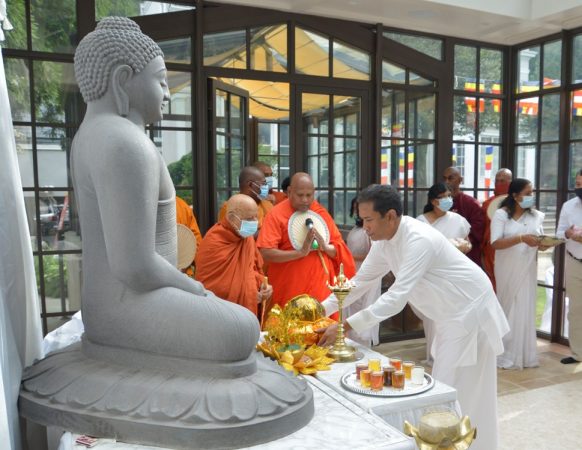 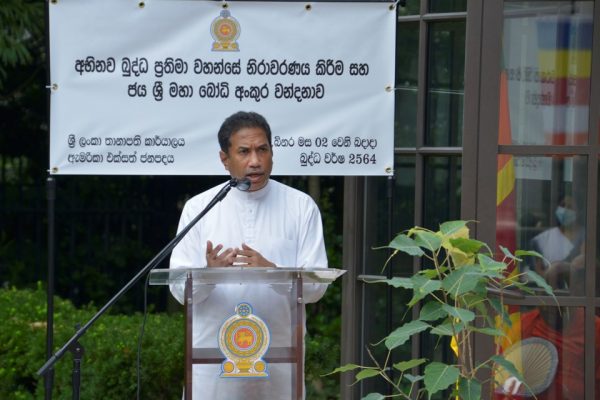 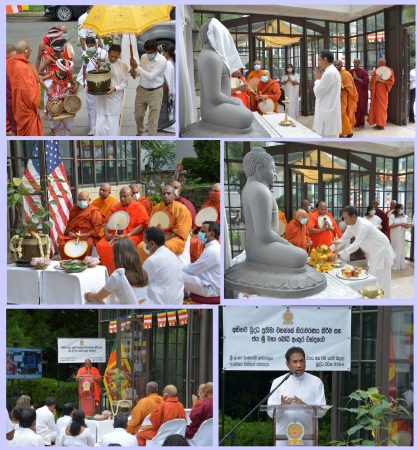